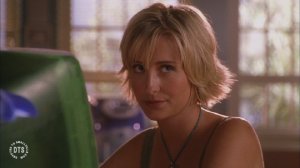 n honestly say “Chloe Sullivan” was one of my favorite characters on “Smallville.”  She was adorable, smart, resourceful, tenacious and one of the most loyal friends “Clark Kent” ever had.  Despite the feelings she had for “Clark” and feeling the pain of pining for someone she knew in her heart she would never have,  she was always there for him and later on became his main sidekick.

I wish I had a tenth of “Chloe’s” character.  She had a lot of passion and she

wasn’t afraid to stick to her guns when she felt she was doing the right thing, even if she was being ‘crucified’ for it.  That takes a lot of guts and she had plenty of that, and who can forget the “Matrix” episode, or when they went into the future, she was bad-ass too.

“Allison Mack”, after looking at her blog makes me believe they knew what they were doing when they chose her for that role.   She’s quite a talented writer.  Check it out, not the ‘wall of weird’, but it’s very creative.